CLT – Ben Sando was fueling equipment recently when he noticed that a Delta MD 90 was taxiing with its bin door open. Ben contacted the Supervisor on duty, Keith Marrow, who then called airport ops and had the issue corrected.  Our guys did a great job of being aware of their surroundings and possibly stopping a major problem from occurring with the aircraft.

BOS – While cleaning an aircraft early one morning, Julia and Jerome McIntosh both challenged a TSA agent trying to enter the plane. The agent asked Julia and Jerome a few questions which the two were able to answer correctly. Julia was then told by the TSA agent before leaving that JetStream always does a great job in finding what has been hidden on the aircraft. Kudos to Julia and Jerome and a great job done by the BOS team!

GSO – On two occasions in one day, our amazing GSO team members challenged TSA agents. Don Walker prevented unauthorized access to a secured area and Oscar Lanzas, Robert Sanders, and Inez Marcelino challenged an agent at the gate. These four team members did an amazing job and received a huge compliment from a TSA Inspector. Keep up the good work Team GSO!!! 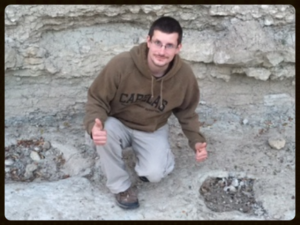 The Pioneering Spirit choice for this newsletter is not one, but two very hardworking JetStream team players, Ty Yount and Jon Prater.
Ty and Jon were chosen because of all of the hard work and hours they put in during the CMH transition. The two both worked the bag room every day
during the transition because they were shorthanded. Jon would pick Ty up every morning at 4 a.m. on his way into work and they would work 12-14 hour
daysfor almost a month straight.
Ty and Jon make a great team and did an amazing job working the ramp, learning the new American system and training the other employees the new American way of
doing things. Thank you guys for all of your hard work. You two make a great team!!!

Photos from the CMH Transition 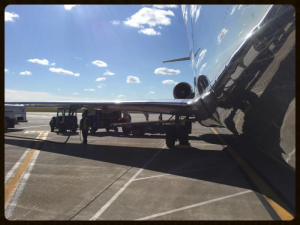 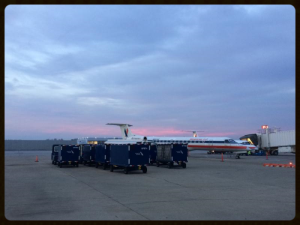 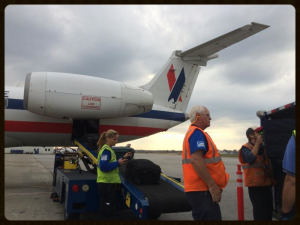 Jeff Pierce has recently been promoted from 3rd Shift Manager on the utility side to the General Manager of Ramp Operations in CLT.
His new responsibilities will include the Southwest and Frontier Ramp operations.Jeff began his career with Jetstream in 2013 and has over 30 years of ramp and utility experience which is why Jeff is the perfect candidate for this position. Keep up the good work Jeff! 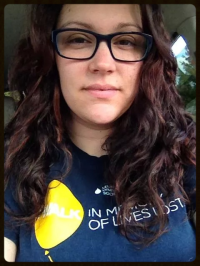 Congratulations to our new Duty Manager in CMH, Ashley Andracchio.
Ashley joined our JetStream team in July 2014 as a Training Coordinator and quickly worked her way up to Duty Manager. Her airline industry career began in 2009 where she worked for airlines such as Piedmont, Air Wisconsin, and Republic Airways.
In her free time, Ashley and her husband love to travel and her passion is cooking. She attended Culinary School while working for Air Wisconsin, but she says she always winds back up at the airport because she really loves aviation.
Congratulations on your new position Ashley, we are happy to have you as part of our team!

Den General Manager – We are happy to announce that Joe Mascaro joined the JetStream Team on June 3, 2013. Joe has over 14 years in the airline industry and  previously worked with JetStream from 2003-2006 at our SLC station as the Cargo Manager. Other airlines and companies that Joe has worked for include Delta, Northwest Airlines, Air Serv and Integrated Airlines Services. Joe says that”it is great to be back to the JGS family and I am looking forward to building a cohesive team in the DEN HUB”. We are thrilled to have Joe as part of the JetStream Team again and wish him the best!

Jon Prater will be transferring to  CMH to take on the duty of General Manager. He is currently the General Manager at BUF and will be making the move back to the station where he started his career with JetStream as a Supervisor.
Jon’s previous work history includes DGS and America West.  Jon is definitely a JetStream team player.He has always been one of our go-to TDY guys when we had new contract openings or needed anyone to fill in. CMH is happy to have Jon back and this move will bring Jon closer to his family members that live in Columbus.
Manager of Training and Standards CLT and DEN – Pamela Johnson will be joining us on Monday June 10th, taking on the role of Manager of Training and Standards for CLT and DEN. Pamela will be stationed in our CLT hub and travel between the two locations.
Her new role will include developing content and training programs for our Hub operationsand overseeingthe trainers in both stations. We look forward to having her as part of our Hub operations and JetStream team.
BUF General Manager – James Virella has just accepted the BUF General Manager position. James is currently our Training Coordinator at the BUF station. He has been with JetStream for one year and he has over 7 years experience in the airline industry. James spent one year with TSA as a Transportation Security Officer and 5 years with Swissport USA as a Department Supervisor, Baggage Services Supervisor and Lead Agent. James says he is “very excited to be moving forward with this company and has enjoyed it so far and looks forward to working even harder to maintain our level of commitment and service in BUF”. Congratulations James!

The Art and Craft of Blogging

The ultimate guide for independent travellers seeking inspiration, advice and adventures beyond their wildest dreams

A frequent flier's views on flying and travel

Every day is an adventure

A random flight through some of my extraordinary flying adventures

SamTravelChick
Tales from the Terminal

adventures at the airport and other random musings

Breaking News, Sports, Weather, Traffic And The Best of NY

Just a girl who travels.

The No.1 Site for Airline Product News and Reviews

From the Left Seat